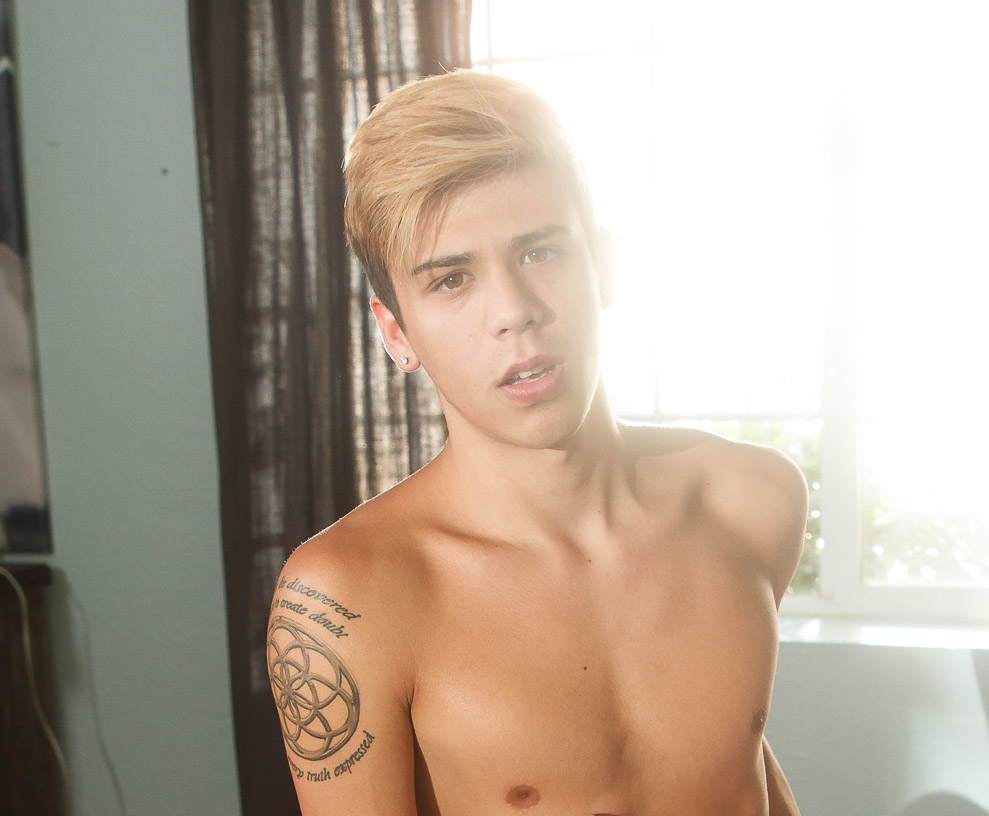 From his coming-out trauma to finding himself on camera

Those that have seen the work of Landon Vega at Helix know what a sweet soul he is. As laid back as one would expect, Landon says he was more excited about the adventures the industry provides. “To be honest, I was more excited for traveling to another state I had never been to than the sex.”

This attitude and approach to life serves Vega well. Now dating fellow Helix hunk Tyler Hill, Landon’s life was not always so easy. Like some of our other models, Vega did not get to come out by his own choice. But reflecting on it, Landon admits that his accidental coming out story is kind of funny.

“I had a lesbian friend. We were snapping back and forth. She sent a pic of vaginas drawn all around her. So, I sent one back with dicks. Or so I thought,” Vega explains. “After a while I was like ‘why isn’t she snapping me back?’”

“And then, as soon as the thought popped in my head, my cousin sent me message asking if I was gay. and I was like ‘No! I’m not gay! What the fuck are you talking about?’ I was mad and that’s when she sent the photo of me all painted up with cocks, and that’s when I realized I had accidentally loaded it to my story her instead of just to my lesbian friend.”

Landon explained that he continued to be defensive about the picture with his cousin, explaining that it was a joke for a friend. But that’s where the comedy ends. Unfortunately, when Landon’s cousin saw the Snap story, so did his Grandma. And the Grandma told Landon’s Dad, “And he was piiiiiissssed.”

“He told me I wasn’t his son. He threatened to hit me and break my jaw.” Landon ran away from home. He had his mom come and pick him up and stayed with her until the next day. That’s when things got worse.

“My dad had custody. After that incident, he used the court system to make sure I couldn’t go to her again if I ran away.” Taking proactive steps, Landon worked with his high school to graduate early so that he could move out as soon as possible.

As for long-term career goals, Landon plans to eventually go into medicine. The squirmy-cringy stuff that others recoil away from actually ignites a passion for helping people. “For me it would be about being a part of a team. To help even one person survive something awful seems like it would be fucking amazing to do.”

How telling it is that someone who has emerged from awful emotional trauma stronger and fiercer than he could ever imagine wants to aide in that for someone else. Rock on, Landon.

Portions of this interview edited for clarity from a series of email and Twitter conversations.

1 thought on “The Rise of Landon Vega”